The Luso-Brazilian fraternity, based on shared language and historical and cultural affinities, underpins the official narrative on relations between Brazil and Portugal. This book critically assesses whether and how this discourse has influenced each country’s foreign policy issues and bilateral interests and contacts since the late twentieth century. After all, of how much rhetoric and how much real potential is the dialogue between these sister-countries made of? 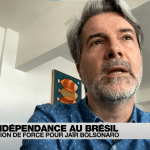